Last Thursday, Google began rolling out the new Google Products Reviews Update – I covered everything Google has said about it over in that story but now, it is time to cover the impact. It has been a few days since it started rolling out and those hit by this update are showing that this update can be as big as a core update if impacted.

If you missed what this update is about, read my original story – it should explain it all and I’ve been updating it through even this morning with new information from Google.

Now, with this rollout, it seemed to have really touched down right away. Google said it started rolling out Thursday afternoon and can take about two weeks to fully roll out but it seemed to really start in a big way early on, as early as Friday. So this is a pretty aggressive rollout, like some previous (but not all) core updates (not that this is a core update).

This seems to have done what Google said it would and shake up the product reviews category, and yes, it did seem to have a big impact on affiliate websites with a lot of product reviews.

Here is some of the chatter I’ve been following at WebmasterWorld and some BlackHat World threads – keep in mind, the affiliate forums are pretty heavy here, which I am not covering in detail.

Its the second day I am getting a high personal score from semrush so something is going on. I dont think its a manual penalty but why couldnt it be an automated penalty by one of the algorithms?

I woke up to a huge shakeup across the board in all my terms, SEMrush has my personal volatility at 9.0. Seeing huge drops in a broad range of terms…where I was 5 or 6 in January I am now 45 or 85. I’ve dropped on terms I have dominated for a decade, and yet the same sites that have crawled up all year continue upward, very odd. I was just starting to slightly recover from the Feb 13th and March 15th drops.

Wow traffic is off a cliff today, did wonder what was up, guess it must be this update.. I don’t have any product reviews or products on my site though so go figure!

Here too. Yesterday was much worse! My main site is about weather forecast. This update encompasses much more than they said.

A definite update in my UK vertical yesterday. More of the usual with links looking like the only metric that really counts.

One of my sites has jumped up considerably! It’s a spammy one that I use just for testing and I fired a stack of completely irrelevant links at it last month. Google rewards quality content? Yeah, right.

My personal semrush score yesterday was 7.3 yesterday, today it’s 9.1. You cant tell whether this is the product review algo or something else. Since the December every update like this only makes things worse.

The traffic of my amazon affiliate site was normal yesterday but today I am seeing a decline in SERP rankings and traffic decreased by 60%. Anyone facing a similar situation? Any Suggestions?

One of my company’s website (Niche – Tech) has lost almost 20% of its daily traffic. I was thinking that it happens because of Google’s latest algorithm update “Product Review”, but when I checked the Google Analytics “The post whose traffic has been down was not a product review post”, all of these are “How-to” based post.

Now I’m not able to figure out why this happened and how to recover from this. Can someone help me in this, how can I recover my lost traffic or is there any google update, that hits the website.

Glenn Gabe shared some very mind-blowing charts of some sites that have product reviews that got his hard by this update:

Here are some exs of reviews urls either dropping heavily or surging. I confirmed these drops or surges by checking the historical SERPs. Made sense when I checked out the sites & reviews… Again, very early into the update, but interesting to see the movement. Stay tuned. pic.twitter.com/i4SdBYpXMq

More from the front lines of the Product Reviews Update. This is the worst drop I have come across yet. Very core update-like. I confirmed the drops across many queries. And big drops for many, not just a few spots. Like what I shared this weekend, tends to make sense… pic.twitter.com/e0q54FbOe4

One SEO saying he got his hard:

Most of the keywords that were ranking in the top 5 positions (constantly from last 2 months) are now gone out of 100.

As of now, only 2 keywords are up rest whole site is down.

Marie Haynes did an early poll asking if this impacted folks, most said no but it was a very early poll:

The Google Product Review update launched April 8 (English Language only). Were you or your clients significantly affected?

Would love for you to leave a comment with what you are seeing.

Now let’s look at the tracking tools but keep in mind, most of these tools do not break out the data by type of site – i.e. e-commerce, affiliate, etc, which is what this update leaned towards. But most tools showed big changes right after Google announced this:

Mozcast (101 temperature which is big for Moz): 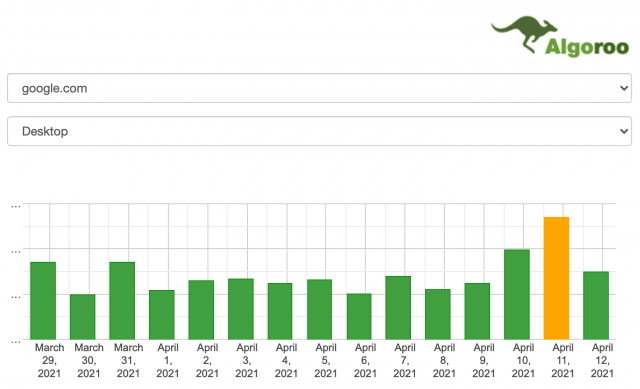 Accuranker (not as huge but yes, a change):

Anyway – so this update does seem to have legs – and those who have content that is product review related, especially in the affiliate space, seemed to have felt this update in a big way.

I’ll keep tracking it, because this update is still rolling out.