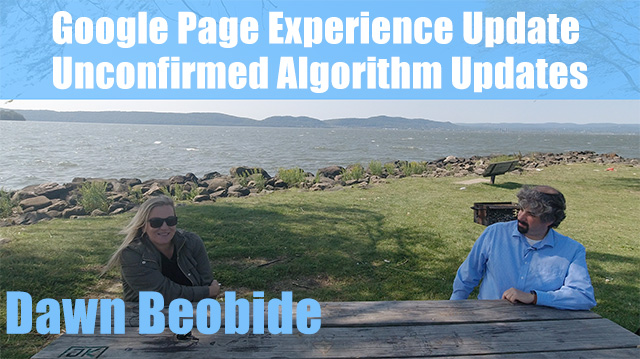 Dawn Beobide and I in part two of the video started to talk about the upcoming Google Page Experience Update. Google is going to release a new update around Core Web Vitals and page experience factors. She said this goes back to her strategy on getting and educating your developers on SEO, which we discussed in part one of our talk. Education is key to getting your developers to understand that there is an upcoming update and this is how to prepare.

Dawn said we knew this was coming; she felt that based on her data on rankings and traffic, Google is rewarding sites that do well with page experience now. So even more so when it officially releases. So in short, she has been telling her teams to work on these aspects long before Google even announced them as a real ranking factor.

We then moved onto talking about unconfirmed versus confirmed Google algorithm updates. She said things have changed a lot over the years with Google algorithm updates. Today, things change so fast, she can prepare a ranking report and send it out and by the time the client gets it and reviews it, those rankings have drastically changed again. The confirmed updates are usually very specific but the unconfirmed updates are usually all across the board. She said the data says the story and you cannot deny it.

When it comes to recovering from Google core updates, she said you can recover but you cannot fully recover from these core updates. At the same time, one site might get nailed by an update and others will not notice anything. Sometimes confirmed updates are more noticeable but not always.

Dawn offered up some specific examples of this in the pharmaceutical space and how these core updates, since the Medic Update, are a bit too sensitive for some companies. She said the company tried to combine content, to strengthen that content, they have expert writers who are even medical doctors write a lot of the content. She has not had to do much because the site does super well organically.

I then put her on the spot asking her which are the biggest Google algorithm updates, and she said Penguin, Hummingbird and Medic were the largest updates for her.

You can learn more about Dawn Beobide on LinkedIn or on Twitter @SEOChic09.

You can subscribe to our YouTube channel by clicking here so you don’t miss the next vlog where I interviews. I do have a nice lineup of interviews scheduled with SEOs and SEMS, many of which you don’t want to miss – and I promise to continue to make these vlogs better over time. If you want to be interviewed, please fill out this form with your details.